In this concert film, Servir Antico tell the story of Christine de Pizan (1364 – ca.1430), a revolutionary woman who questioned the treatment of women and their prescribed place and role in society in her magnum opus, The Book of the City of Ladies. Though it was heavily criticized at the time, the poet Martin Le Franc, unlike most other men, championed her cause and helped spread awareness of the importance of women as active and multifaceted citizens. The programme is in praise of womankind, with works from the Ars Subtilior, compositions by Baude Cordier and Soulage, and anonymous compositions alongside works by Binchois and Dufay. Catalina Vicens and Servir Antico present this exquisite concert, which was recorded in the medieval chapel of Notre-Dame- à-la-rose in Belgium.

“An exquisite ode to womankind at the Bach Fest… Here’s to high praise of womankind, from a group that brilliantly bridges the distant past with the present.” – Janet Smith, Stir Magazine

This concert is generously supported by Elaine Adair

Man and Woman: Joined in their diversity

Christine de Pizan was born in Venice in 1364. At a young age, she moved with her family to Paris, when her father, Thomas de Pizan, was appointed astrologer to the court of Charles V of France. The young woman held her father in very high regard, and he, defying the conventions of the time, placed great importance on the education of his daughter, giving her opportunities normally only offered to men. When speaking of her mother, Christine identifies with the wisdom, versatility and beauty of motherhood, incarnated in the figure of Mother Nature: a woman, a creator of life. Her words of admiration and praise can be heard in Mother: crowned queen from the moment she was born, extracted from her Livre de la Mutation de Fortune (Book of the Mutability of Fortune) from 1403, in which she allows us to enter into the intimate world of her personal life. After entering into a loving marriage to Étienne Castel while young and welcoming three children into the world, she becomes a widow in 1387 at the age of 22, the same year in which she loses her beloved father.

In the Middle Ages, a widow who did not either quickly remarry or enter a convent was viewed with suspicion, and yet Christine resists remarrying and tries to build up sufficient independent income to maintain her social rank. Afflicted by depression and immeasurable personal pain, she puts pen to paper, and writes Cent Ballades (A Hundred Ballads), in which she lays out for the world her mourning at the loss of her husband, the depth of her isolation and the fragility of her position as a woman in a hostile aristocratic court. Deuil angoisseux (Anguished Grief), one of the poems in this collection, served as inspiration for the composer Gilles Binchois (ca. 1400-1460), and for the new rendering of Christine’s Lament by Catalina Vicens.

Having chosen the profession of a man of letters, socially Christine had effectively ‘become’ a man (de femelle devins masle). She bears the weight of social judgment that ensues but outweighs it with the force of her own self-validation, projecting an identity that today might be called ‘transgender.’ This identity statement is vividly portrayed in the sensual words of Christine’s Mutation: becoming a man from La Mutation de Fortune.

Christine de Pizan thus became the first European woman to earn a living as a professional writer. Her passion for learning was immense and her output was incredibly diverse, embracing scholarly works on philosophical, political, moral, didactic, religious and even military subjects. One of her main interests, however, was history. Although this subject was not yet considered a fundamental discipline in university training, it was to be an important intellectual interest leading to the creation of Le Livre de la Cité des Dames.

Christine writes what we would know today as ‘Herstory,’ i.e., history emphasizing the role of women. By doing so she creates a work that will serve as a potent and lasting weapon in the defence of women against misogyny and for the protection of their right to fulfill a diversity of roles in society.

Against the backlash of harsh critiques, a male poet, Martin le Franc (1410-1461), comes to her defence in the opening years of a centuries-long polemical debate known as the querelle des femmes (“the debate about women” or “the woman’s question”). In his defense of womankind entitled Le Champion des Dames (ca.1442), the protagonist enters into a debate over the true nature of women, their capabilities, and whether they should be permitted to study, write, or govern in the same manner as men. Taking examples from history, he reminds us of Plato’s vision. The Greek philosopher considered that women should study to train and improve their intellectual capacities, and that they could serve many diverse roles in society, serving as magistrates or fighting in wars if they wished to do so. He also warns us of the devastating impact of Roman culture in the spread of misogyny.

The Book of the City of Ladies is a strong critique of the established popular belief, famously propagated by Jean de Meun’s Roman de La Rose, that men are inherently superior to women.

In Christine’s and Martin’s vision, the feminine and masculine are complementary and fluid, as proclaimed in the excerpt Homme et femme, conjoins in leur diversité (Man and woman, conjoined in their diversity) from Martin le Franc’s Le Champion des Dames, in which both identities are seen as fundamental to each individual. The complementary nature of the feminine and masculine can also be heard in Lunne plaine, a piece that uses Nature to symbolize this relationship.

This production was filmed at two historical sites that provide an interesting perspective on the City of Ladies project. The chapel and the gardens of the historic Hôpital Notre Dame à la Rose in Lessines, Belgium, active until 1980, was one of the oldest hospitals to remain uniquely in the hands of religious women. It was founded by a 13th-century noblewoman, Alix de Rosoit, as a place to give medical care to the poor and indigent of the region. The Augustine nuns in charge of the hospital have displayed some quite visionary attitudes to the subject of gender roles through the art that they have commissioned. One striking example is a painting of Christ with a female body, which shows how these women have been able to seek out diverse representations and to think beyond established norms, even while members of a religious community.

The Erasmus House in Brussels, former residence of one of the most influential humanists of the Renaissance, served as a harmonious backdrop for the spoken texts taken from Christine de Pizan’s and Martin Le Franc’s oeuvre, as well as for the commentaries provided by Dr. Hélène Haug, scientific advisor of the museum and by Catalina Vicens, artistic director of Servir Antico. 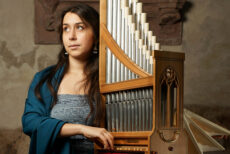 The historic keyboards specialist from Chile, resident in Basel, Switzerland, started at an early age an international career. By age 20 she had already played in the main concert-halls of more than ten North- and South American countries, including Teatro Colón de Buenos Aires Argentina,  Kimmel Center of Philadelphia and Teatro Municipal do São Paulo. To the present, she has performed as a soloist and with renowned ensembles in Central Europe, Scandinavia, Great Britain, North- and South America, as well as being invited to give several courses and master-classes.

As a child, Catalina developed a strong interest in music, history, science, visual arts and film. She took on the piano at age 7, and while studying at the conservatory, she was awarded with a full scholarship to study harpsichord with Dr. Lionel Party at the Curtis Institute of Philadelphia (where she shared the classroom with some of today’s leading classical musicians and conductors).

By getting into early music, she found the right combination of technical skill and critical knowledge she was aiming to combine. This is what took her to move to Europe and continue her harpsichord studies with Prof. Robert Hill in Freiburg, Germany, and Andrea Marcon at the Schola Cantorum Basiliensis, Switzerland.

It was in Basel where Catalina found a place to discover things beyond the classification of herself: a harpsichord performer.  She encountered Iranian Percussion, and enchanted by the richness of its sounds started to study with the Iranian Master Madjid Khaladj and other percussionists. She taught herself organ. At the same time she attended theory classes with Crawford Young at the Medieval Department of the Schola Cantorum Basiliensis, and fascinated by the tuning systems, history and constellation of sounds of medieval music, started a new chapter as the world’s first “Master in Medieval Keyboards”.

After winning a major historical keyboards competition on harpsichord and forte-piano, she came back to one of her early musical loves, and devoted three years to a Contemporary Music Performance Master at the Musik Hochschule Basel. Since then she has toured the world giving performances as a soloist and in diverse constellation, given lectures on an array of subjects, taught at Universities and Conservatories in over 10 countries, and currently teaches at the Royal Conservatory of Brussels and pursues a Ph.D degree at University of Leiden, The Netherlands, and the Orpheus Institute, Ghent, Belgium.

This wide view on music, sound and history has taken Catalina Vicens to create Servir Antico, with whom she wants to express her artistic creativity, skill and vision, and share the experience with esteemed and respected colleagues as well as with the audience.

SERVIR ANTICO is a musical and social project which aims to bring the human and its creative power as a bridge between past and future. Inspired by the legacy of Renaissance Humanism (broadly speaking, an intellectual/cultural movement forged from the 13th century with its climax in the 16th century) each project combines historical music with themes that invite listeners and participants of the social projects into a moment of reflection, creation, and expression and to propose a kinder, creative future.

Founded and directed by Catalina Vicens, musician and researcher specialized in medieval and renaissance repertoires, she unites the power of acclaimed vocal and instrumental soloists with vast experience in historically informed performance with the desire to create an environment of respect and communication. Their programs are designed not to only bring an almost forgotten repertoire to contemporary audiences, but to immerse them in a multi-sensorial experience. Poetry, dramaturgy, and musical text transport the listener back to an era of dazzling creation, though, introspection and beauty. With the music and texts as a point of departure, projects of social engagement are an intrinsic part of each program.