A series of four free public performances by professional musicians in the intimacy of the Green College Coach House. The 2019-2020 Green College events will be an important part of the preparation and research surrounding the artistic programming for a new EMV sub-series to begin in 2020-2021 entitled Passports: Early Music from Around the World. This new series will investigate historically informed performance practices from Non Western European traditions. Generously supported by Chris Guzy and Mari Csemi 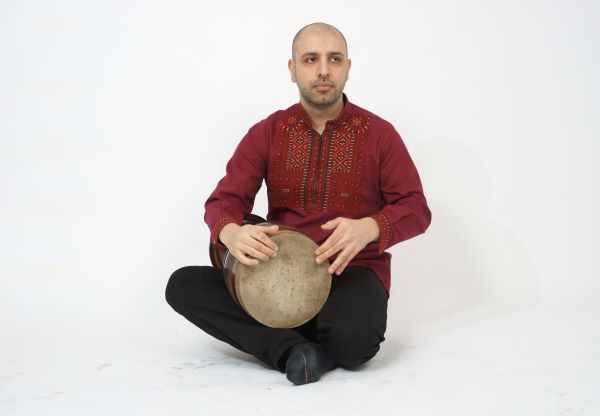 Hamin Honari is a Iranian-Canadian hand drummer who has specialized on the Iranian hand drum, Tombak. He has focused on adapting his drumming style and technique to accommodate many different genres of music. He is the artistic director for the Vashaan Ensemble and and has performed with many amazing musicians and singers such as Juno-award-winning Gordon Grdina, Salar Aghili, Parissa, Hossein Omoumi, Hossein Behroozinia, Saeed Farajpouri, and Itamar Erez. Hamin lives in Vancouver, BC where he is actively teaching and performing Persian and middle-eastern hand drums at the VSO School of Music. 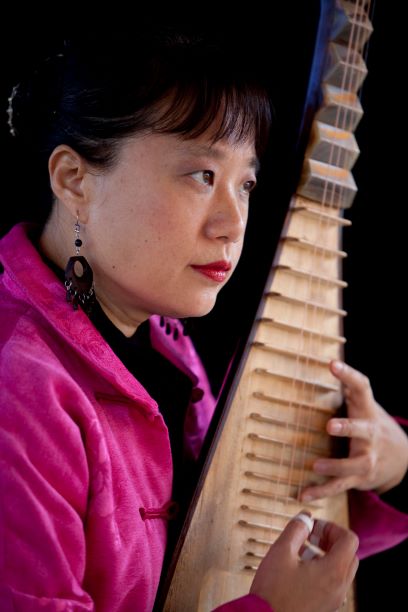 Born in the province of Shaanxi China, Qiu Xia has had two notable careers in music: as a performer and teacher back home, and then as performer, composer, producer and teacher in Canada.

Qiu Xia was introduced to playing music at five. At thirteen, recognized as a profession- al and toured with large ensembles for six years. With intense determination, she over- came all competition and went on to study at the Xian Music Academy where she be- came an expert in Pipa repertoire and Chinese music. Due to her exceptional achieve- ments, she was invited to the faculty as an instructor after graduating in 1987.

Since immigrating to Canada in 1989, through her music, Qiu Xia has made friends all around the world, and has delighted audiences everywhere. Invited as a featured soloist with a few symphony orchestras such as Vancouver, Victoria, Calgary, Montana USA and Bohuslav Martinu Philharmonic Czech. With her own ensembles Silk Road Music and JouTou, Qiu Xia has forged her own stamp on the world music stage by extending the techniques and approaches of the traditional Pipa. She has participated in thou- sands of performances over her career.

As an educator, with her deep traditional roots and vast live performing experience, Qiu Xia is intent on introducing Chinese music to all nationalities and share her passion for music playing. Besides private teaching, she has been actively involved in mainstream Canadian education with such organizations like: Artists in Residence for the Vancouver school board, Learning Through Arts of the Royal Conservatory of Canada, Britannia World Music Program, Artstarts Vancouver, Prologue to the Performing Arts of Ontario. Now, VSO School of Music. 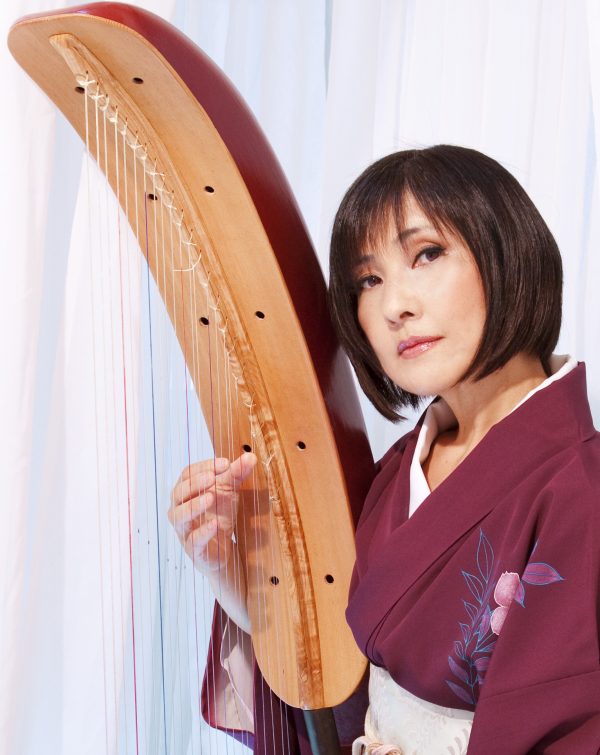 Tomoko Sugawara was born in Tokyo, Tomoko Sugawara began playing the Irish Harp at age twelve. She added the Concert Harp at sixteen, and graduated with a BS in harp at Tokyo University of the Arts. She studied cultural history at Seijo University in Tokyo and took up the angular harp (or kugo) in 1991. The kugo is the “mother of all harps,” played 3,000 years before any European harps.

After moving to NYC, she learned to play baroque music on the Italian Triple harp: from Figured Bass to the Art of Ornamentation.

She has given solo recitals on the kugo at major international venues, such as The World Music Institute (NYC), and World Harp Congresses (Prague, Amsterdam, and Vancouver). Other places include The Early Music Guild of Seattle, The British Museum, Central China Conservatory of Music (Beijing), The Symposium on Historical Harps (Berlin), and Shanghai Conservatory of Music. She has given recitals at many US Universities: Columbia, Harvard, Pennsylvania, Princeton, Illinois, Indiana, Pittsburgh, and UC Berkeley. She has led her ensemble, Eurasia Consort, at The World Music Institute.

In September 2018 and Spring 2019 she will take up a position as Visiting Researcher at Shanghai Conservatory of Music. 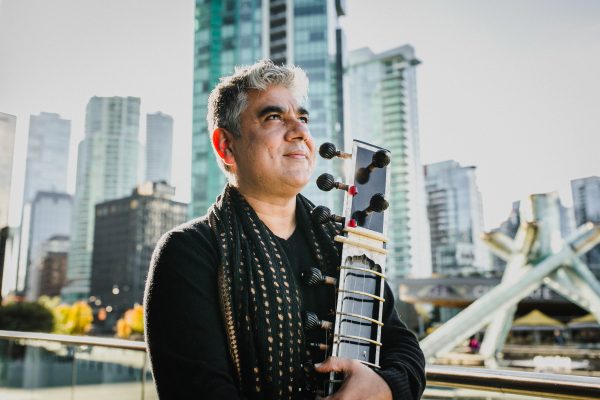 Mohamed Assani is a celebrated sitar player and composer known for being a proactive ambassador for his rich musical tradition. Throughout his extensive career, he has brought the sitar to new audiences through innovative collaborations that have stretched the boundaries of his instrument. He has performed Hindustani classical music as well as his own original music across the globe — with orchestras, string quartets, hip hop artists, DJs, world music ensembles, jazz artists, Indian & Pakistani classical artists — and as a soloist. Mohamed has been invited to present his music to royalty and heads of state, including the Governor General of Canada, Royal Family of Dubai and HRH Prince Karim Aga Khan.

According to the Georgia Straight Newspaper, “Assani is both a musician who’s deeply rooted in the artistic traditions of South Asia and a one-of-a-kind innovator who’s bent on ensuring that those age old forms will survive, and grow, in the modern era.  Vancouver’s world music scene – already one of the best anywhere – might be about to get a whole lot more interesting.”

His most recent project has been co-composing a concerto for sitar and orchestra alongside composer John Oliver. This was premiered by the Vancouver Symphony Orchestra in November 2017. The piece was hailed as a “spectacular success” and “a triumph” by Musicworks Magazine.

Mohamed’s musical journey began at Dartington College of Arts in England, where he did a degree in Western Classical and World music. He then went on to learn sitar in the traditional way and is a senior disciple of Ustad Ashraf Sharif Khan of the Poonch Gharana.

Mohamed is a leader in his field – forging new paths for his music to develop and grow, while remaining committed to the rich depths and roots from which his tradition has emerged. He is based in Vancouver, Canada.

For over five years, EMV has offered an annual series of free lecture-demonstrations at Green College at UBC, related to our season programming and designed to inform and grow our audience base. These events have been increasingly well-attended and have stimulated a dialogue between the organization and the local community regarding the wider context of our activities in the community.

Green College is a graduate residential college at the University of British Columbia, and also a society of scholars and intellectuals stretching around the world, including hundreds of former residents, associated faculty, and distinguished visitors. The College’s reach extends far beyond its stunning location on the edge of the UBC campus in Vancouver, Canada, where it is nestled on a forested cliff overlooking ocean and mountains. It is an ever-expanding community, ready to welcome those with a passion for the exchange of ideas and an interest in the cultivation of academic and creative connections. This founding ideal is reflected in the motto of the College’s coat of arms: “Ideas and Friendship.”

The College was founded in 1993, thanks to a gift from Dr. Cecil H. Green. The College has formal ties with Green Templeton College, a sister institution at Oxford University also endowed by Cecil Green, and with Massey College at the University of Toronto. It was established as a centre for advanced interdisciplinary scholarship, with a mandate, reflecting Cecil Green’s vision, to bring together disciplines across the University through non-curricular programs and collaborations, while also opening the University to the wider local community.

The College’s commitment to exceeding the ordinary limits of academic discourse and to providing a venue hospitable to constructive thinking on all fronts is captured in the College’s tagline “Creating New Horizons.” Special visitors are invited each academic year to enrich conversations at the College and on the UBC campus, both through regular series of interdisciplinary talks and the prestigious Cecil H. and Ida Green Visiting Professorship program. The College also hosts a Writer-in-Residence program. With rare exceptions, the College’s academic programming is open to the whole UBC community and the general public. The College welcomes those from both within and outside the University to join residents and members for dinner in the Great Hall. 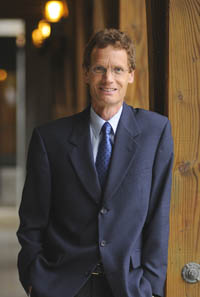 Dr. Mark Vessey has been the Principal of Green College at UBC since July 1, 2008. Prior to his appointment as Principal, Dr. Vessey had a long history with the College, having previously served as Acting Principal in 1998/99, and as a Faculty Member of Green College since 1994. Dr. Vessey obtained his B.A. in English at the University of Cambridge and his D.Phil. in Ancient History at the University of Oxford. He came to UBC in 1989 as an I. W. Killam Postdoctoral Fellow in the Department of English, and was appointed to a faculty position in that department in 1990. He held a Visiting Fellowship at All Souls’ College, Oxford, in 1997 and was Visiting Professor of Augustinian Studies at Villanova University in 2000. In 2001 he was awarded a Canada Research Chair in Literature / Christianity and Culture (renewed in 2005), and in 2005 won a Senior Killam Research Prize at UBC. Before taking up his position as Principal of the College, he served as Associate Head and Chair of the Graduate Program in English. He is a member of the UBC Senate, representing the Faculty of Arts, for the triennium 2008-11.

Dr. Vessey’s research focuses on processes of text-, canon- and discipline-formation in the Latin Christian culture of the later Roman Empire (4th to 6th centuries) and their role in the shaping of longer-term discourses and institutions of “western civilization,” particularly those associated with “literature.” He has published in the fields of Roman history, patristics, medieval studies, Latin and English Renaissance literatures, literary theory, and the history of the book. He is married to Dr. Maya Yazigi and they have a daughter, Leila.