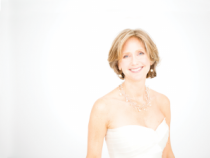 Suzie LeBlanc took on the position of Artistic and Executive director of Early Music Vancouver in January 2021. Born in Acadia, the charismatic soprano is well-known for her passionate performances of Early Music, art song, contemporary music and Acadian traditional repertoire. She began her international singing career in the Consort of Musicke (London) and continued to specialize in early repertoires, researching and recording a substantial amount of unpublished material.

She appears on over 75 recordings including the Grammy award winning album Lully’s Thésée with the Boston Early Music Festival. She won an ECMA for Best Classical Album for “I am in need of music”, an album she produced on poems by Elizabeth Bishop. She has also recorded for ATMA, Hyperion, Chandos, Harmonia Mundi, Teldec, Analekta, Pasacaille and Das Alte Werk. Prior to coming to EMV, Suzie founded and directed Montreal’s Le Nouvel Opéra, a company which produces early and contemporary chamber opera performances. She was appointed to the Order of Canada in 2015 for her contribution to Early Music and Acadian culture.

As Business Manager, Nathan provides oversight of EMV’s financial matters including preparation of the annual budget in partnership with Executive & Artistic Director, monitoring of budget to actual results, recording and processing all financial transactions, and preparation of financial statements to Treasurer.  He also provides office and administrative support to ensure staff is properly supported by the appropriate systems and technology and generally does what is required to support the Society, the office, and concert performances. Having handled the accounting for other charitable societies, he started working with EMV five years ago as a part-time bookkeeper when the Society was interested in having its accounting handled in house by a staff member and was promoted to the position of Business Manager in late 2015.

Michelle has worked as the Resource Development Manager for EMV since July 2019. Prior to that, she had recently worked for three different choral organizations in Vancouver: Vancouver Cantata Singers, Vancouver Bach Choir, and Phoenix Chamber Choir. She is a graduate from UBC (Bachelor of Arts in Music) and holds an ARCT from the Royal Conservatory in voice. She currently sings with Vancouver Cantata Singers and is the soprano section leader at St. James Anglican Church. Michelle was born and raised in Kelowna, BC. She enjoys being outdoors in BC as much as possible, particularly to hike, camp, and forage mushrooms.

onathan is a Vancouver native, and has worked in the cultural sector for most of his adult life with an emphasis on music. He is a graduate of Capilano University’s Arts & Entertainment Management program.

Laina joined EMV as the Marketing & Volunteer Coordinator in 2017. She also teaches piano part-time, having completed her ARCT from the Royal Conservatory of Music in 2008. She received her Bachelor of Arts from UBC and then received her diploma in Broadcast Journalism from BCIT. When she is not working, she can be found hiking with her partner and her beloved dog, Kuro.