Home  >  Early Music Vancouver Past Events  >  Sequentia: The Queen and the Troubadour

Pre-concert chat at 6:45 PM with Benjamin Bagby and Matthew White

With students from the Vancouver Early Music Summer Programme

Inspired by the stories of ‘courts of love’ presided over by twelfth-century noblewomen such as Eleanor of Aquitaine, this programme presents songs, stories and dances from the love-drenched world of the troubadours and minstrels of medieval Europe. Sequentia is joined on stage by a group of dynamic young professional singers and instrumentalists, participants in the legendary Vancouver summer course in medieval music.

Due to the unique nature of this venture, the exact programme will not be available until a few days before the performance.  As soon as the final programme is determined it will be available here and as a programme insert at the concert itself.  Translations of the sung texts will be provided in video projections.

Sequentia is among the world’s most respected and innovative ensembles for medieval music. Under the direction of Benjamin Bagby, Sequentia can look back on more than 40 years of international concert tours, a comprehensive discography of more than 30 recordings spanning the entire Middle Ages (including the complete works of Hildegard von Bingen), film and television productions of medieval music drama, and a new generation of young performers trained in professional courses given by members of the ensemble.

Sequentia, co-founded by Bagby and the late Barbara Thornton, has performed throughout Western and Eastern Europe, the Americas, India, the Middle East, East Asia, Africa and Australia, and has received numerous prizes (including a Disque d’Or, several Diapasons d’Or, two Edison Prizes, the Deutsche Schallplattenpreis and a Grammy nomination) for many of its thirty recordings on the BMG/Deutsche Harmonia Mundi (SONY), Raumklang, Glossa and Marc Aurel Edition labels. The most recent CD releases include reconstructions of music from lost oral traditions of the Middle Ages (The Lost Songs Project), including 9th and 10th century Germanic songs for the Apocalypse (Fragments for the End of Time), the ensemble’s acclaimed program of music from the Icelandic Edda: The Rheingold Curse, as well as the earliest-known European songs (Lost Songs of a Rhineland Harper), medieval liturgical chant (Chant Wars, a co-production with the Paris-based ensemble Dialogos), and most recently, Boethius: Songs of Consolation. Sequentia has created over 80 innovative concert programs which encompass the entire spectrum of medieval music, giving performances all over the world, in addition to their creation of music-theater projects such as Hildegard von Bingen’s Ordo Virtutum and the medieval Icelandic Edda. In 2017, Sequentia’s 30-year project to record the complete works of Hildegard von Bingen was released by SONY as a 9-CD box set. The work of the ensemble is divided between a small touring ensemble of vocal and instrumental soloists, and a larger ensemble of voices for special performance projects. Upcoming projects include a version of the 14th –century Roman de Fauvel, staged by Peter Sellars, and presented in co-production with the Metropolitan Museum/Cloisters (New York) and the Théâtre du Châtelet (Paris). After many years based in Cologne, Germany, Sequentia’s home was re-established in Paris in 2001.

Benjamin Bagby is descended from a Germanic clan which emigrated from Jutland to northern England in ca. 630, where they remained until his branch of the family emigrated to the colony of Virginia almost a millennium later. Following 321 years of subsequent family wanderings, he was born on the shores of Lake Michigan, and twelve years later was captivated by Beowulf. Several years after returning to Europe in 1974 he founded -- together with the late Barbara Thornton --  the Sequentia ensemble for medieval music, which was based in Cologne, Germany, for 25 years; both Mr. Bagby and Sequentia are now based in Paris. www.sequentia.org.

Mr. Bagby’s acclaimed bardic performance of Beowulf, with 10-20 performances yearly worldwide was created in 1990 and released as a DVD in 2007 (for details and press see www.BagbyBeowulf.com).

Beowulf has been presented at the Lincoln Center Festival ( 1997 & 2006 ), in Vancouver Island and the Faroe Islands; synagogues in Poland and the Lower East Side of New York; a warehouse in Los Angeles and a medieval art museum in Cologne; Perth, Pittsburgh and Perugia; the Cloisters and the Sydney Opera House; a high school in rural Texas and the Cité de la Musique in Paris, among many others.

In addition to his work with Beowulf, Mr. Bagby and Sequentia have produced several CDs of musical reconstructions from the early Middle Ages, all part of the ‘Lost Songs Project’: 2 CDs based on the medieval Icelandic Edda, ‘The Rheingold Curse’ (2002), which retells the story of Sigurd, Brynhild, the dragon Fafnir, and the cursed Rheingold; ‘Lost Songs of a Rheinland Harper’ (2004), which explores Latin and German song in the period around the year 1000, using as its source the famed ‘Cambridge Songs’ manuscript; ‘Fragments for the End of Time – 9-11th centuries’ (2008), featuring some of the earliest apocalyptic texts in Old German, Latin, and Old Saxon. Sequentia’s newest program in the series is ‘Frankish Phantoms', presenting songs from the Carolingians and Ottonians. A DVD production of Mr. Bagby’s Beowulf performance, filmed by Stellan Olsson in Sweden, was released in 2007 and includes interviews with noted Anglo-Saxonists and with the performer. In addition to his activities as researcher, singer, harper and director of Sequentia, Benjamin Bagby writes about performance practice and teaches widely in Europe and North America. Since 2005 he has been on the faculty of the University of Paris - Sorbonne, where he teaches in the master’s program for medieval music performance practice. 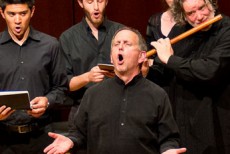 Sequentia: The Queen and the Troubadour, flutes

Spanish-Ukrainian tenor Wolodymyr Smishkewych is a native of New Jersey, USA. He has specialized in medieval song, chant, and new music since the 1990s. He received his training in voice performance from Rutgers University (BM ‘95, MM ‘98) and Indiana University’s Jacobs School of Music (DM ‘13), having studied with renowned tenors Frederick Urrey, Paul Elliott and Alan Bennett. A sought-after performer and vocal pedagogue in medieval, contemporary, and world music, he has lectured and taught masterclasses and performance programs at universities in the United States, South America, Canada, and Europe.

In 2011, he joined the faculty of the Irish World Academy of Music and Dance at the University of Limerick, Ireland, where he was director of the MA in Ritual Song and Chant until 2014.

He is a member of Sequentia Ensemble for Medieval Music and of Paul Hillier’s Theatre of Voices, and has performed with The Harp Consort and Ars Nova Copenhagen. His opera appearances in the USA and Europe have been under the baton of directors such as Peter Sellars, Gary Wedow, Benton Hess, and James Middleton. He has performed at major festivals including BBC Proms, Tanglewood, Regensberg Tage Alter Musik, Festival Cervantino, Edinburgh Festival, and the early music festivals of Boston, Barcelona, Utrecht, and Berkeley. He has recorded for Sony/BMG, Harmonia Mundi USA, ExCathedra, and IU Music-Focus records, and written for publications by Cambridge University Press and Taunton Press.

Upcoming performances include performances of Frankish Phantoms with Sequentia Ensemble for Medieval Music at the 2015 Boston Early Music Festival, and Händel’s Messiah in Lausanne, Switzerland with Resurgam and the Irish Baroque Orchestra in November 2015. Wolodymyr Smishkewych gratefully acknowledges funding support from the Music Network Music Capital Scheme, funded by the Department of Arts, Heritage and the Gaeltacht (Arts Council Ireland).