Constantinople partners with the seminal Corsican polyphonic singing group A Filetta, to create an enchanting sonic tableau where light and shadow meet, through sacred and secular songs from the rich Corsican musical tradition. Polyphony by the prodigious vocalists of A Filetta, as well as songs and music orchestrated by Kiya Tabassian, will come together in a deeply moving concert.

Between sea and mountains, between eastern modes and polyphony — Clair-obscur is born of the desire for deeper dialogue on the part both of the musicians of Constantinople and the singers of A Filetta, the preeminent ensemble of Corsican polyphony. They have created a poetic and musical suite, mixing polyphonies and songs rooted in their traditions and repertoires.

This alliance has roots in two lands, two vital sources of contrasting geographies. On the one hand, the insular beauty of Corsica, between land, sky and sea, austere and powerful, embodied in these polyphonic vocals in turn melancholic and festive; on the other, the refinement of the musical and poetic traditions of Persia, which dictated its magical laws to the East.

The common denominator here is certainly their early and modal form of expression, but even more it is their contemporary language that both ensembles wished to see converge. “To avoid the traps of juxtaposition (…), to go elsewhere by listening to and understanding the Other (…), to create a fresco that can be viewed as a unique work” (Kiya Tabassian): such is the goal of these exploratory artists, who share an unquestionable sense of harmony.

The musical understanding they developed over the years has here given rise to magnificently accompanied sacred and profane songs, revived lamentes and folias, as well as new co-creations. Deep and vibrant, the music seems to arise from the bowels of the earth… 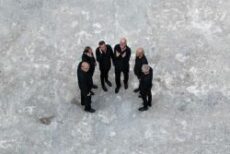 A Filetta’s music is a journey… It could be said that it is a polyphonic and vocal proposal that is challenging, audacious and contemporary, even though coming from a powerful oral tradition.

It is in 1978 that very young people — among whom teenagers, driven by a strong willingness to contribute to the protection of a declining oral heritage — started their journey… and their journey has been long, sometimes sinuous but always punctuated by discoveries and wonderful encounters. Therefore, the singers gladly confess that « the encounter » is written in their musical DNA.

The repertoire produced today by this vocal sextet is a faithful reflection of what is, since the beginning of the 1980s’, its « forward walk » : a trajectory outlining a movement initiated in a secular orality and asserting itself in the twists and turns of writing without complex, freed from any filial obligation. Sacred music stands alongside profane songs with multiple influences, films scores with Bruno Coulais, creations for Sidi Larbi Cherkaoui’s choreographies, choruses for an antique tragedy or pieces from a requiem requested by the Saint-Denis Festival.

A Filetta’s music is dedicated to a vision of the world rejecting without any ambiguity identitarian closure and the vocal ensemble’s philosophy is encapsulated in this beautiful aphorism by René Char : « The purest harvests are sowed in a ground that does not exist; they get rid of gratitude and only owe to spring.