Baritone Jonathon Adams and Les Voix Humaines viol consort recorded this moving performance at the McCord Museum in Montréal. The Métis songs, which survived in the memories of travelers from Quebec to the Prairies, are in Michif, French, and English. The earliest songs can be traced back to their European origins, with melodies that are remarkably similar to airs de cour, a form popular in 17th century France, that were often accompanied by viols. We hope you’ll enjoy hearing these beautiful songs, often plaintive, of the Rossignol Sauvage, a voice of the Métis people.

The Cinematheque: Purchase your ticket by clicking here.

The nightingale, at liberty to sing of love and longing, is the star of this programme devoted to songs of nature and nurture! Multicultural, the songs, and gigues encompass many aspects of Canadian history with French, Scottish, Irish, and British colours are woven into a complex and beautiful tapestry.

Of their ambiguous status, little is known about the artistic life of the Métis and their unique contribution to Canadian culture during the 17th and 18th centuries.

The Métis songs, which thrived in the memories of travelers from Quebec to the Prairies, are in Michif, French, and English. The earliest songs can be traced back to their European origins. With a purely aural legacy and still sung by elderly Métis, the songs are being collected by Lynn Whidden at the University of Manitoba, Brandon. As with most traditional songs, the melody remains fairly constant but the improvised accompaniment changes as styles evolve. The earliest melodies are remarkably similar to airs de cour, a form popular in 17th century France, that were often accompanied by viols.

Music by composers of airs de cour can be found in the private collections of music found in Quebec’s family libraries. Henry Du Mont, Jean-Baptiste Morin, André Campra, Jean-Batiste Lully, and Marc-Antoine Charpentier also composed wonderful viol music some of which are featured in this concert.

Viols in Quebec? The French nuns in the Quebec convents were dedicated to the education of both European and indigenous children. In 1640, Mother Marie de l’Incarnation wrote that one of their indigenous wards, Agnés Chablikuchich had made great progress….in playing the viol. We know that instruments were abundant in Quebec. A cache of twelve viols was found in the vaults of the Hôpital générale in Quebec City during the 19th century. Historically, however, as fashion dictated, most viols were cut down or built up to be transformed into violins, violas, and cellos by the end of the 18th century.

Imagination and creative thinking are intrinsic to a programme dependant on joining the dots! We hope you’ll enjoy hearing these beautiful songs, often plaintive, of the Rossignol Sauvage, a voice of the Métis people! 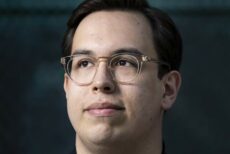