For this concert, Ensemble Constantinople has taken the liberty of reinventing the music left by Italian early baroque composers such Kapsberger, Monteverdi and Rossi. In response to these beautiful works, Constantinople will interpret a few masterpieces from the Polish composer at the Ottoman court, Ali Ufuki, as well as new compositions by Constantinople music director, Kiya Tabassian. The ensemble aims to create a dialogue that recreates the spirit of the cultural exchanges between Venice and Eastern capital cities, such as Constantinople. The spontaneous changes, sharp contrasts and unusual rhythmic groupings in this program provide fertile ground for the musicians of Constantinople, who always welcome the chance to free themselves from the cultural codes of old Europe. 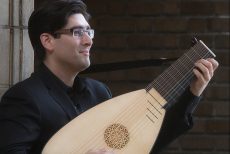 Canadian guitarist/lutenist Michel Angers collaborates in numerous artistic projects for various ensembles as a continuo player (Tafelmusik, Constantinople, Les Violons du Roy, Les Idees Heureuses, Les Poètes de l’Amérique Française and Consort Laurentia) and as a soloist throughout Canada, America, and Europe. He is also a recording artist for renowned Italian label Stradivarius. Angers values the honour of educating others and maintains a successful private studio. He is a sought-after mentor serving on faculty with the Orford Center for the Arts and the Lunenburg Academy of Music Performance.

Upon receiving his Master of Music degree from Laval University in Québec, Angers was awarded the highest distinction from the Quebec Music Conservatory. In 2005, Angers won the classical guitar category of the prestigious Canadian Music Competition.

Receiving Numerous grants by many cultural organizations, he has been a scholar of Tafelmusik Baroque Summer Institute, Oberlin Baroque Performance Institute (Lucas Harris) and Early Music America which gave him the opportunity to attend the Accademia d’Amore in Seattle to study under the direction of Stephen Stubbs. In 2011, Michel Angers won the Award of Artistic Creation presented by the Conseil des arts et des lettres du Quebec. Twice a grant holder of the Marco Fodella Foundation, Angers specialized in early music under Paul Beier, at the Academy of Music in Milan. 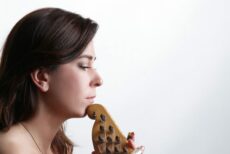 Born in a family steeped in music, kanun (Turkish zither) player and composer Didem Başar began her music education at the Istanbul Turkish Music State Conservatory when she was 11 years old. After completing the Conservatory’s kanun program, she continued training at the same institution and received a bachelor’s degree in composition.

Her interest in examining the effects of art on society led her to pursue a master’s degree in the musical analysis of Mevlevi music at Marmara University. She gave lectures on Turkish music and kanun playing techniques at Halic University’s Turkish Music Conservatory and the Istanbul University State Conservatory from 2001 until she moved
to Canada in 2007. Relocating to Montreal has given Didem the opportunity to reinterpret her music in a new environment whose vividness is the result of the turbulent convergence of manifold cultures flowing from different parts of the world.

After composing for different ensembles and playing with different artists over the past 15 years, Didem Başar wanted to create her own project, which would intersect her two musical influences: Turkish and Western classical music. During an artistic residency at the World Musicians Centre in Montreal, she was able to call on the talents of Noemy Braun, a classical cellist with a flair for improvisation, Guy Pelletier, a flute virtuoso and highly versatile musician known for exploring different genres and styles, Brigitte Dajczer, a violinist rooted in Eastern European and Romani folk music, and Patrick Graham, another remarkably versatile musician with a broad knowledge of different percussion instruments from all over the world. The album, Levantine Rhapsody, was released in February 2020 and received the Opus Award for best world music album of the year, as well as many other prestigious nominations.

Fascinated by the cello’s origins and the creative process of new music, Elinor Frey plays both period and modern instruments. Her recent release on the Belgian label Passacaille, Berlin Sonatas with Lorenzo Ghielmi on fortepiano, was nominated for a Juno award for Best Classical CD, Solo & Chamber Music and won the 2015 Québec Opus Prize for Early Music CD of the year. Her first Baroque CD, La voce del violoncello, was praised for its “careful scholarship and brilliant layering of moods and tempos” (Toronto Star) and for the “honest, reflective beauty of her music making” (Strings). Her performance of this program was the winner of the public prize at the 2013 Utrecht Early Music Festival Fringe. In May 2017, she released Fiorè, the world premiere recording of the sonatas of Angelo Maria Fiorè and various unknown Italian arias, performed alongside Lorenzo Ghielmi and Suzie LeBlanc.

Frey’s debut album, Dialoghi, is titled for the solo piece written for her by Steven Stucky, and her CD of new works for Baroque cello, titled Guided By Voices, will be released on the Analekta label in March 2019. These works are by Scott Godin, Linda Catlin Smith, Ken Ueno, Isaiah Ceccarelli, Maxime McKinley, and Lisa Streich. She also recently performed Lutoslawski’s cello concerto and a new concerto by Colin Labadie with the Laurier Symphony, as well as a concerto by Keiko Devaux with Ensemble Arkea and conductor Dina Gilbert.

Over a two decades career based in Montreal, Canadian multi-percussionist Patrick Graham has been described as a “master improviser… on the border of several forms of traditional and creative music, embracing the world of rhythm as a whole” (Yves Bernard, Le Devoir). Patrick displays a talent for fusing an eclectic array of influences—ranging from Japanese percussion, through Indian and Irish rhythms, to Mediterranean frame drumming—as a well as a passion for new sounds and improvisation. This unique cross-genre approach is reflective of an extensive and ongoing study of the art of percussion, including a Bachelor of Music from McGill University in Montreal, as well as private training in several countries with Trichy Sankaran, Glen Velez, Carlo Rizzo, Zohar Fresco and Taichi Ozaki. In addition, Patrick has attended workshops and master classes at the Banff Centre for the Arts, Simon Fraser University, the Labyrinth centre in Crete and participated in the Taiko Koh-Kan workshops conducted by the group Kodō, on Sado Island in Japan.

Patrick performs, tours and records regularly with many groups and ensembles, including Constantinople, as well as contributing to productions by IMAX, Cirque du Soleil and Ubisoft Games. Alongside a busy performing and recording schedule, Patrick is also active as an instructor, teaching percussion and rhythm workshops in Canada, the USA, India, China and Japan, as well as for the Cirque du Soleil.

Recognized for the elegance and passion of her interpretations, Tanya LaPerrière is a graduated violin master of the Royal Conservatory of Brussels under the direction of Mira Glodeanu, as well as McGill University under the guidance of Chantal Rémillard. Co-solo violin of Arion orchestra, she also performs on Canadian and international stages with the celebrated ensembles Caprice, Constantinople, Studio de musique ancienne de Montréal, Clavecin en concert and Les Idées Heureuses. She is currently collaborating as a coach for the baroque orchestra at Université de Montréal (OBUM) alongside Luc Beauséjour.

She also leads as solo violin and founding member her quartet, Pallade Musica, winner of prestigious awards in Utrecht (Holland) and New York (United States), also nominated for two Opus Awards for their recordings on the Atma label. Ms. LaPerrière regularly performs as Concertmaster in Canadian ensembles and is building a solid reputation as a leader in early music throughout the country.