Join us for EMV’s season finale with the Pacific Baroque Orchestra and Vincent Lauzer! Gaining a reputation as one of the world’s most virtuosic soloists of his generation, Lauzer is a national treasure whose career is only just beginning. This programme features ravishing music by Handel and his Italian contemporaries that are the perfect vehicle for Vincent’s prodigious talents.

“Lauzer meets these demands with precision and polish throughout the recital, but it is obvious that he reads, hears, and feels through the racing arpeggios and stacked sequences into something deeply personal.” – Early Music America

Concert will remain available for one year from premiere date. Free to access. Donations welcome.

The four composers on this programme have two things in common: they all received the bulk of their musical training in Italy and found themselves in London later in their careers. All of them were also indebted to the outstanding talents of the previous generation, Arcangelo Corelli and Alessandro Scarlatti. Francesco Geminiani, in fact, studied with Corelli directly and paid tribute to his teacher by arranging his violin sonatas as concerti grossi. Corelli first published his sonatas for solo violin and continuo, Op. 5, in 1700. By the middle of the eighteenth century, they had been republished no less than 25 times throughout Europe. In an era that tended to treat musical works as highly disposable, this was a tremendous feat. Geminiani’s arrangements capitalized on Corelli’s particular popularity in England, even long after the older composer’s death. These concerti first appeared in 1729, published by John Walsh. The work featured here, an arrangement of Corelli’s tenth sonata in F major, stays very close to its model. Geminiani’s scoring is standard for the concerto grosso—two solo violins and cello with a small ensemble of strings. The biggest challenge of arranging Corelli’s sonata is that the solo violin part in the original often simulates multiple voices at once by rapidly alternating between different registers. Consequently, Geminiani kept the first violin part of his concerto largely identical to Corelli’s model. Adding another treble part to this results in several voice crossings where the second violin part ascends above the range of the first. In the Preludio in particular, the second violin adds a freely undulating accompaniment to Corelli’s melody, which constantly weaves around it like musical filigree.

Giovanni Bononcini came from a highly musical family, and he too owed Corelli a debt in terms of musical style. Bononcini was born in Modena but was educated in Rome, where Corelli and Scarlatti were the respective masters of instrumental and vocal music. By 1697, Bononcini was employed as a cellist and composer at the Imperial Court in Vienna under Holy Roman Emperor Leopold I. There, in 1701, Bononcini composed the oratorio La Conversione di Maddalena. Bononcini would have become very familiar with the oratorio genre while in Rome, where it was a popular sacred dramatic entertainment during Lent when theatres and operahouses closed. Both the oratorio as a musical genre and the image of Mary Magdalene as a repentant sinner were popular in Counter-Reformation southern Germany and Austria. This oratorio follows Magdalene’s ultimate rejection of profane love in favour of divine love (which are two allegorical characters in the work along with Magdalene’s sister, Martha). The opening sinfonia to this piece is typical in style, with a slow introduction followed by a rapid, highly imitative second section. The fast portion is in fact a double fugue, with two subjects, one in slow, stately half notes juxtaposed with a rapidly ascending scale figure. Both ideas pass around the ensemble constantly to weave a beautiful musical tapestry.

Bononcini would later settle in London by the 1720s, where he became George Frederic Handel’s rival. Like Bononcini, Handel traveled to Rome to further his musical training, though Handel made his home in London earlier, by 1714. The recorder sonata on this programme was printed as part of Handel’s “Op.1”, a problematic publication by John Walsh that may have had little to do with Handel. In fact, there are definitely works in the publication that are not by Handel. The C major recorder sonata, however, survives partially in Handel’s handwriting; that fact and the high quality of the music confirm Handel’s authorship. The fast second movement employs a large amount of double counterpoint—an indication of Handel’s skill—where the treble and bass parts are matched evenly. The musical ideas work equally well on the top or on the bottom of the musical texture. The slow third movement starts out with a repeating idea in the continuo part, suggesting a ground bass that wanders between closely related keys. The idea eventually fragments, however, creating greater variety. The subsequent movements are French dances, demonstrating Handel’s highly cosmopolitan style.

Giuseppe Sammartini, like Bononcini, also came from a highly musical family. Both Giuseppe and his father were oboe virtuosi. Sammartini was born in Milan but eventually moved to London, where he found employment in the household of the Prince of Wales. The concerto presented here, well known to recorder players, exhibits many more progressive features common to Italian music around 1730. Due to changes in musical priorities around that time, the bass, unlike in the other pieces on this programme, has a purely supportive role, mostly chugging along in constant eighth notes to reinforce the harmony. The recorder, though it was rapidly losing popularity to the transverse flute on the Continent in the 1730s, endured as both an instrument for amateurs and professionals in England, as attested by Handel’s sonata and Sammartini’s concerto, respectively. 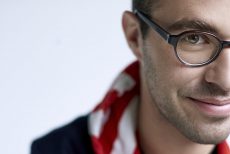 Révélation Radio-Canada 2013-2014 and Breakthrough Artist of the Year (2012 Opus Awards), recorder player Vincent Lauzer graduated from McGill University where he studied with Matthias Maute. He is the artistic director of the Lamèque International Baroque Music Festival in New-Brunswick. In October 2018, his recording of Vivaldi’s concertos with Arion Baroque Orchestra and Alexander Weimann was awarded a Diapason d’Or by the famous French magazine Diapason.

Winner of several prizes in national and international competitions, he has been awarded the Fernand Lindsay Career Award, a scholarship given to a young promising Canadian musician for the development of an international career. Vincent received the Béatrice-Kennedy-Bourbeau Award at the Prix d’Europe 2015. In 2012, he won the First Prize at the Stepping Stone of the Canadian Music Competition and the Career Development Award from the Women’s Musical Club of Toronto. In 2009, he was awarded the First Prize and the Audience Appreciation Prize in the Montreal International Recorder Competition.

Vincent  is a member of Flûte Alors! and Les Songes, two ensembles with whom he has toured Eastern Canada with Jeunesses Musicales Canada. Vincent performs as a soloist with Arion Baroque Orchestra, La Bande Montréal Baroque, the Montreal Symphony Orchestra, the Pacific Baroque Orchestra, and Les Violons du Roy. He has played in various series and festivals in Canada and in the United States as well as in Mexico, France, Germany, Spain and Belgium.