Written in the wake of his opera Billy Budd, Canticle II (Abraham and Isaac) was composed between late 1951 and early 1952 and is a potent “miniature opera” for alto, tenor and piano created from a 15th-century Chester Miracle Play telling the story of Abraham and Isaac. Written for and dedicated to contralto Kathleen Ferrier (who created the title role in The Rape of Lucretia 1946), her part is now more commonly sung by a counter-tenor. Britten later drew on Canticle II for his War Requiem, in the setting of Wilfred Owen’s bitter retelling of the biblical story.

“Man is for a women made”
(by Henry Purcell, arranged by Benjamin Britten)
tenor & piano

“I Dreamed a Dream the Other Night”
(traditional folk song)
countertenor, unaccompanied

A British person looking at a map of Vancouver might be forgiven for expecting it to be a sort of Britannic home-away-from-home: names like Granville Island, English Bay Beach, and Nelson Street seem more like the ghosts of a vanished British-imperial past, incongruous to the contemporary reality of this beautiful, dynamic Pacific metropolis. The presence of the Victorian neo-gothic Christ Church, nestled amongst the skyscrapers, is therefore even more surprising and touching. The Cathedral has an intimate grandeur combined with the cosiness of a parish church. It is the kind of building in which Benjamin Britten would have felt perfectly at home and a most fitting venue for his music.

Britten’s dominance of the music scene in the latter half of the twentieth century might lead to the impression that his music is “typically British” but the reality is more complex and international than this. He once listed his own principal influences as Monteverdi, Purcell, Bach, Gluck, Mozart, Weber, Schubert, Mahler, Berg, Stravinsky and “even Tchaikovsky, if he is played in a restrained, though vital way”. To this one can certainly add Schönberg and his teacher Frank Bridge. By contrast, Britten showed distain for the leading British composers of the day, proclaiming himself “absolutely incapable of enjoying Elgar, for more than 2 minutes.” He also abhorred Vaughan Williams and the pastoralist school, which makes his decision to arrange folksongs all the more puzzling. Yet it would seem Britten decided to set the songs in a manner consciously opposite to that of the pastoralists, as Britten specialist Philip Brett puts it:

“Unlike Cecil Sharp and Vaughan Williams, who assigned an idealized, essential artistic quality to the melodies which their accompaniments were thought to reflect, Britten recognized that the venue changed the genre and turned them in effect into lieder or art-song, and proceeded brilliantly on that premise.“

Despite altering the nature of these traditional songs, Britten’s arrangements manage to amplify the meaning and beauty of the texts, something that he achieves to even greater effect in his original compositions. His exquisite word-setting, wonderfully displayed in Canticle I, is a direct result of his study and arranging of Purcell in the early 1940s. As he himself put it, “almost the greatest importance of Purcell for us to-day is the example of his prosody. Here surely is the way to make the English language live again in song.” Developing these ideas, Britten then championed the cause of English-language opera and founded the English Opera Group in 1947. Canticle II, written as a fundraiser for the group in 1952, is a dramatic masterpiece in miniature, expertly playing out the tension between and fears of the two protagonists. Setting the words of God for two voices and arpeggiating piano accompaniment is a stroke of genius. God becomes mystical yet familiar, powerful yet approachable, paradoxes also reflected in the character of this church; text, Britten’s music and architecture conjoin here in perfect harmony. 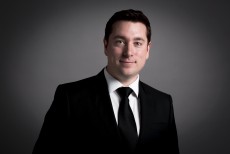