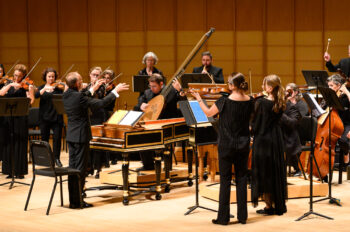 This year, EMV’s Festive Cantatas features some of the most popular Christmas music of Germany in the 18th century by Johann Kuhanu and J.S. Bach. Kuhnau was cantor in the Thomaskirche of Leipzig before Bach and in addition to being a remarkable composer, he was a lawyer and a linguist who wrote a satirical novel, Der musicalische Quacksalber (1700). Only recently has Kuhnau’s church music been given a bit of the attention it deserves. Kuhnau’s cantata « Wie Schön leuchtet der Morgenstern » (How brightly shines the morning star) is filled with moments of lyric beauty and expertly-rendered Italianate ritornelli echoed in the solo vocal lines. The quality of this work is an excellent argument for exploring more deeply the musical culture that preceded and influenced J.S. Bach. This cantata contains some of the earliest orchestral writing for natural horns and this may have inspired Bach to do the same in his cantata by the same name as well as in Cantata V of the Christmas Oratorio. The Christmas Oratorio was originally written as six cantatas for six different days between Christmas and the feast of Epiphany.

For this performance of Cantatas IV and V from the Christmas Oratorio, five Canadian soloists of international renown join the musicians of the Pacific Baroque Orchestra, under the direction of Alexander Weimann.