From the twelfth century until today, griots, known as “the Bards of West Africa”, have transmitted their music and knowledge from generation to generation through a sophisticated and unbroken oral tradition. Griot and master of the kora, Ablaye Cissoko and Kiya Tabassian, master setar player, perform the intersecting music of the Mandinka Kingdom, Persian Empire, and European Baroque, taking the audience on a journey across regions and eras. 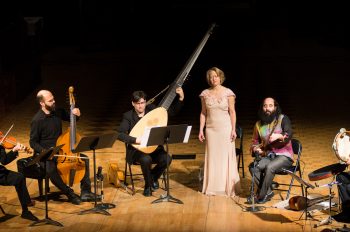 For this concert, Ensemble Constantinople and Suzie LeBlanc have reinvented the pages left by Renaissance Venetian madrigalist Barbara Strozzi, marvellous composer and singer. A worthy heiress of Monteverdi, Strozzi created a secular vocal repertoire that intoxicates the senses. In response to her songs, Constantinople will interpret some of the masterpieces from the same period played in Ottoman and Persian courts creating a dialogue that recreates the spirit of the cultural exchanges between Venice and Eastern capital cities, such Constantinople. Suzie LeBlanc’s illustrious and unique vocals will be enhanced by the brio, nimbleness and bold improvisations of Constantinople’s five virtuosos.