Home  >  Early Music Vancouver Past Events  >  Bach to the Future: The Legacy of the Art of the Fugue – The Diderot Quartet

It wasn’t until another Leipzig composer, Felix Mendelssohn, led a revival of Bach’s music that it began to attain such universal appreciation and admiration. In this programme, Diderot String Quartet performs excerpts from The Art of the Fugue with Mendelssohn’s rarely heard Fugue for string quartet, op. 81/4, a beautiful nod to Bach, and his beloved String Quartet No. 2, op. 13, which pays homage to the baroque master in its own fugal ways. This event is a collaboration with the Friends of Chamber Music.

September 1756: In what must be a devastating moment for the Bach family, Carl Phillip Emmanuel has offered up the copper engraving plates for one of his father’s seminal works, “Die Kunst der Fuge.” Weighing about 100 pounds, the plates are for sale as scrap metal and C.P.E. has pledged to accept the first reasonable offer. After only 30 copies of the sheet music had been sold, even at a reduced price, C.P.E. was left with no choice.

Why was nobody interested in what C.P.E. advertised as Johann Sebastian Bach’s “final work”? From the very start, Art of the Fugue presented musicians with copious riddles to solve. First and foremost: is this a theoretical work, the old Bach strutting his stuff with an antiquated compositional form, perhaps intended as a treatise for his students? Or can this work actually be realized in performance? Bach wrote this work in open score, meaning that each voice is in its own stave, but the instrumentation is unspecified. How, then, are we supposed to perform it?

Why would Johann Sebastian write such a work? Perhaps it makes sense in the context of his new obsession, during the final decade of his life, with large-scale works based entirely on one subject: Goldberg Variations (1741-2), Musical Offering (1747), and the Canonic Variations on Vom Himmel hoch (1748). Perhaps Bach was additionally motivated throughout his later years by the famous criticism published by Johann Adolph Scheibe in 1737, according to which Bach’s music was “turgid and confused,” its “beauty darkened by an excess of art” that buried the melody, detracted from the beauty of the harmony, had excessive ornamentation, and was difficult to play.

To add to the mystery, the final fugue (Contrapuntus XIV) has been passed on to posterity in an unfinished form. The first printed edition, prepared by Bach himself during the last two or three years of his life and seen through by C.P.E. in 1751, states that “while working on this fugue, in which the name BACH appears in the countersubject, the author died,” engendering the romantic notion that Bach died pen-in-hand. Others speculate that the sheet of paper on which Bach was completing the fugue is simply lost, or that he intentionally left the work incomplete as though inviting the the performer to run with it and finish their own story — an invitation, incidentally, accepted by more and more musicians over the past century.

Whatever the circumstances, and however few copies of the score C.P.E. was able to sell, Art of the Fugue is a work that over two centuries later musicians and scholars, such as the famous Bach scholar Christoph Wolff, would still be marveling about:

“Even in its unfinished state, The Art of Fugue stands before us as the most  comprehensive summary of the aged Bach’s instrumental language. At the same time, it is a highly personal statement; the letters BACH woven into the  final movement represent much more than a fanciful signature. Theory and  practice merge in this work. By letting the substance of the musical subject be logically uncovered and systematically exhausted, by employing traditional and novel techniques of composition as well as old and new elements of style, Bach created an autonomous work of art that embodies the character and universality of his art.”

Most universally it is argued that these fourteen fugues and five canons are best performed on a keyboard instrument (organ and harpsichord, for example). However, the four-part fugues lend themselves beautifully to the string quartet formation. Diderot String Quartet is eternally grateful to the 100 pounds of copper that did their part in disseminating some of the most stunning and beautiful art ever to be created.

It’s no secret that Felix Mendelssohn (1809-47) was passionate about the music of J. S. Bach. The most celebrated and grand manifestation of this fascination is Mendelssohn’s famous 1829 Berlin revival of Bach’s St. Matthew Passion, a pair of performances of the work that  Mendelssohn — against opposition from those pragmatic few who thought the piece too sprawling and costly to produce (and, indeed, cuts were made) — organized and directed from a piano. In 1823, Mendelssohn had received a newly made manuscript copy of a full score for the Passion, a piece that we presume had not been performed in decades, as a generous and thoughtful gift from his maternal grandmother, Bella Salomon.

Mendelssohn’s familial encouragement of Bach-worship also emanated from Salomon’s sister, Mendelssohn’s great aunt Sarah Levy. A well-connected and entrepreneurial musical figure in Berlin, Levy knew and had musical dealings with two of Bach’s sons, Wilhelm Friedemann and Carl Philipp Emanuel. Through those Bach- and Mendelssohn-family connections, J. S. Bach’s resplendent music filled Levy’s home and planted itself into the minds of young Felix and his sister, Fanny Mendelssohn. Both musical prodigies studied and performed Bach’s music, and Felix even composed a number of cantatas in direct imitation of Bach’s compositional style.

Felix Mendelssohn’s love of all things Bach naturally included a fascination with fugues, a medium that Bach had decidedly mastered. In 1821 and 1822, respectively, Felix and Fanny — both wizardly young pianists — performed fugues by J. S. Bach for the famous Johann Wolfgang von Goethe in Weimar. As a composer, Mendelssohn was bitten hard by the fugue bug; and in a stroke of genius that gives us reason to rejoice, he wrote many of his fugues  for string quartet. More than a dozen such stand-alone string-quartet fugues date from 1821, and yet another fugue dates from much later in Mendelssohn’s career.

For a moment, let us focus on that late fugue and fast-forward to the mid-1840s. Mendelssohn, in his mid-30s and now living in Leipzig, is ill and frail, and he senses (correctly) that he may not have much longer to live. He writes some outstanding music for string quartet in his final years: his sixth complete string quartet — a haunting work that Mendelssohn dedicated to the recently deceased Fanny — and four short pieces: Andante, Scherzo, Capriccio, and Fugue. These four short works were published as a set, op. 81, shortly before Mendelssohn’s death, and we extract the set’s fugue for our program tonight.

Still more of Mendelssohn’s fugal writing for string quartet is embedded within his fully formed, multi-movement quartets. The very first string quartet that he composed, unpublished and dating from 1823, ends with an impressive double fugue. And several fugal passages appear in Mendelssohn’s first published string quartet (op. 13), a work that Mendelssohn completed only a couple of years before his St. Matthew Passion spectacle. His op. 13 is a passionate and hauntingly beautiful work, and it borrows musical material from a Lied (German art-song) that Mendelssohn had composed a few months earlier. The Lied, “Ist es wahr?” (op. 9, no. 1), originally scored for voice and keyboard, contains text that’s based on a poem by Johann Gustav Droyson. For your bemusement, we present the original German text alongside an English translation adroitly spun by our own Paul Dwyer:

That you always wait for me, there

in the leafy bower at the vine-covered wall? And ask the moonlight and the stars

Is it true? Speak!

What I feel, only she understands

who feels it with me,

and who stays true

The melodic and harmonic material from “Ist es wahr?” makes appearances throughout Mendelssohn’s op. 13 string quartet, most notably in the stunning, breathless passages that bookend the entire piece. 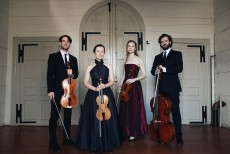 Diderot String Quartet – named after the prominent eighteenth-century French philosopher and Boccherini enthusiast Denis Diderot – came together in 2012 in New York City. Having first met at Oberlin Conservatory and The Juilliard School, all four musicians shared a background in historical performance and a passion for the string quartet genre; and they quickly found the thrill of exploring the latter repertoire on period instruments to be irresistible. Featured in the Chamber Music America article “New Voices in Old Music”, Diderot String Quartet brings a fresh approach to both familiar and lesser-known works of the eighteenth and nineteenth centuries.

In its 2016/17 season, DSQ appeared on the following concert series: Music Before 1800 (NYC), Renaissance & Baroque (Pittsburgh), St. Cecilia Music Series (Austin, TX) and Early Music at St. James (Lancaster, PA). The quartet also enters a third year as a resident ensemble at Holy Trinity Lutheran Church (NYC) and a second year as Quartet in Residence at the Washington National Cathedral. Diderot String Quartet was awarded a two-week residency at Aldeburgh Music in the U.K. Other recent events include the premiere of DSQ’s first-ever commissioned work (Small Infinities by award-winning composer Lembit Beecher) and performances at the Metropolitan Museum of Art, the Cambridge Society of Early Music and Kerrytown Concert House (Ann Arbor, MI).