Bach, Beethoven, and Brahms have been considered the backbone of the Classical canon since the late nineteenth century. Monica Huggett and Byron Schenkman explore some of those composers’ most beloved works, using instruments and playing styles appropriate to the time when that canon was established, including Early Music Vancouver’s magnificent 1870 Broadwood piano. This is a rare opportunity to hear Monica Huggett’s interpretation of Bach’s monumental Chaconne in D Minor — a work which Brahms studied and transcribed — side by side with Beethoven’s “Spring” Sonata, a Bach keyboard toccata, and Brahms’s gorgeous Sonata in G Major, op. 78.

This concert is generously supported by Mark de Silva

The roles of composers in European society changed radically from the time of J. S. Bach to the time of Johannes Brahms. In Bach’s time, no one was thinking of a canon of great works or great composers. Musicians were simply practicing a craft, usually in the service of a church or court, which involved creating new works for specific occasions. They were not writing for posterity nor did they have any particular interest in music from even one generation earlier, let alone hundreds of years past. In fact the music of J. S. Bach was already considered a little too old-fashioned by many of his own contemporaries.

By the time Brahms was starting out, being a composer had transformed into a much more lofty profession. Brahms faced enormous pressure in his youth, especially from the influential music critic (and composer) Robert Schumann, who in an 1853 essay described him as “an individual fated to give expression to the times in the highest and most ideal manner… springing like Minerva fully armed from the head of Jove.” Schumann declared that if Brahms were to write symphonies they would provide “wonderful insights into the secret of the spiritual world” and there was an expectation that Brahms would somehow write Beethoven’s tenth symphony. No wonder it took Brahms more than twenty years to complete his first symphony. This was a far cry from J.S. Bach producing a new cantata for each Sunday of the church year.

Beethoven had a lot to do with this shift in composers’ roles. He was the first composer to be granted an annuity by his patrons, allowing him to compose whatever he wanted without depending on specific commissions or catering to any particular taste. And unlike any of his predecessors he saw himself as an equal or even superior to his royal patrons, supposedly declaring in an argument with one of them that “there have been thousands of princes; there is only one Beethoven!”

Beethoven’s “Spring Sonata” for violin and piano is a work of remarkable serenity and beauty from a composer who was facing more than his fair share of challenges, including loss of hearing in a culture with neither respect nor rights for people with disabilities. This sonata was composed just one year before Beethoven’s famous “Heilignenstadt Testament,” an unsent letter in which he described his isolation, suicidal ideation, and resolve to live for his art. Musically the “Spring Sonata” is on the cusp between the Viennese Classical style of Haydn and Mozart, and the more harmonically and emotionally expansive world of Schubert and the early German Romantics.

It was only in the 19th century that the music of J.S. Bach became very famous. In some ways his work seems more like that of a Romantic composer than one of his own time. Like many 19th-century composers, Bach made use of antiquated material, stretched the limits of common practice harmony, and seemed to have little regard for the fashions of the moment, seeking instead a more universal and timeless form of expression.

Bach’s Sonatas and Partitas for unaccompanied violin were not published until 1802 and were first brought to public attention by the great violinist Joseph Joachim, a longtime friend of Johannes Brahms. These extraordinary works remain the ultimate challenge for violinists to this day. The monumental chaconne which concludes the second partita is the best known piece in the set and is often performed as an independent work. It has been transcribed many times, including a version by Brahms for piano left hand. Bach’s keyboard toccatas are more modest works, alternating free, quasi-improvisatory passages with fugues and moments of technical virtuosity. The recitative-like central section of the Toccata in E Minor foreshadows similar vocally inspired passages in 19th-century keyboard music.

Some of the greatest composers of the 19th century, including Johannes Brahms, were what we might now call “Early Musicians.” In addition to his deep study of the music of J.S. Bach, Brahms conducted choral works from the Renaissance and early Baroque, and he helped prepare the first complete edition of François Couperin’s keyboard music. Traces of Couperin’s Style brisé (broken chord style) can be heard throughout Brahms’ keyboard writing, and there is a delicacy to much of his music which has been lost in many modern performances. The Sonata in G Major for violin in piano incorporates music from Brahms’ own songs “Regenlied” and “Nachklang.” The use of vocal themes to unify an instrumental work hearkens back to earlier practices. This sonata was a special favorite of the great pianist Clara Schumann who referred to it as the “Regenlied Sonata.” When Brahms sent it to press he instructed the publisher to anonymously deposit his fee for it into Clara Schumann’s account.

Notes on the Programme by Byron Schenkman/2018

From age seventeen, beginning as a freelance violinist in London, Monica Hugget has earned her living solely as a violinist and artistic director and, in 2008, was appointed inaugural artistic director of The Juilliard School’s Historical Performance Program, where she continues as artistic advisor. Monica’s expertise in the musical and social history of the Baroque era is unparalleled among performing musicians today. This huge body of knowledge and understanding, coupled with her unforced and expressive musicality, has made her an invaluable resource to students of baroque violin and period performance practice through the 19th century.

Over the last 40 years, Monica co-founded, with Ton Koopman, the Amsterdam Baroque Orchestra; founded her own London-based ensemble, Sonnerie; worked with Christopher Hogwood at the Academy of Ancient Music and Trevor Pinnock with the English Concert; toured the United States in concert with James Galway; co-founded, in 2004, the Montana Baroque Festival; and has served as artistic director of Portland Baroque Orchestra since 1994, where she made her first appearance in 1992 playing Vivaldi’s Four Seasons. From 2006 to 2017, she was also the artistic director for Irish Baroque Orchestra, where she recorded Flights of Fantasy, named by Alex Ross in the New Yorker as Classical Recording of the Year for 2010.

Monica’s recordings, numbering well over 100, have won numerous prizes and acclaim throughout her career. In addition to her baroque violin recordings, she recorded “Angie” with The Rolling Stones in 1972. Monica lives in Portland, where she enjoys cycling and gardening (somewhat compulsively). 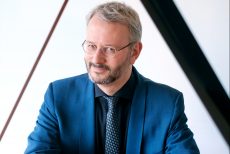 Byron Schenkman has recorded more than thirty CDs of 17th– and 18th-century repertoire, including recordings on historical instruments from the National Music Museum, Vermillion, and the Museum of Fine Arts, Boston. A recipient of the Erwin Bodky Award from the Cambridge Society for Early Music “for outstanding achievement in the field of early music,” he was voted “Best Classical Instrumentalist” by the readers of Seattle Weekly, and his piano playing has been described in The New York Times as “sparkling,” “elegant,” and “insightful.”

He has been a featured guest with the Chameleon Arts Ensemble of Boston, the Daedalus Quartet, Les Enfants d’Orphée, the Northwest Sinfonietta, Pacific Baroque Orchestra, Philharmonia Northwest, and the Portland Baroque Orchestra. He was also founding co-director of the Seattle Baroque Orchestra with violinist Ingrid Matthews. In 2013, he launched Byron Schenkman & Friends, a Baroque and Classical chamber music series at Benaroya Hall in Seattle. Schenkman is a graduate of the New England Conservatory and received his master’s degree with honors in performance from the Indiana University School of Music. He currently teaches at Seattle University and has been a guest lecturer in harpsichord and fortepiano at Indiana University.