“Of all living pianists, [Angela] Hewitt makes the strongest case for hearing Bach on the piano as opposed to harpsichord. Here, she applies the same staggering technique and intellectual grasp to three suites by François Couperin.” (The Independent) Considered one of the foremost interpreters of Baroque music, Canadian pianist Angela Hewitt returns to EMV for a program of J.S. Bach and François Couperin. Lauded for her lifelong dedication to the works of Bach, in 2019 she became the first woman to receive the City of Leipzig Bach Medal Award since the award’s inception in 2003.

This concert is generously supported by Mark de Silva and Eric Wyness. 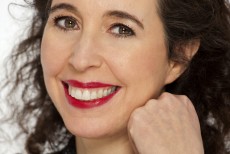 One of the world’s leading pianists, Angela Hewitt regularly appears in recital and with major orchestras around the world. Admitted into Gramophone’s Hall of Fame in 2015, Hewitt’s performances and recordings of Bach have drawn particular praise, marking her as one of the composer’s foremost interpreters of our time.

In summer 2015, Hewitt was resident at Shakespeare’s Globe in London. Recent recital highlights include performances at the Vienna Konzerthaus, Birmingham Town Hall, Bath Mozartfest, Rotterdam’s De Doelen, Sociedad Filarmonica de Bilbao, and a tour of Australia with Musica Viva. Hewitt’s 2016/17 season included performances with the Baltimore Symphony and Winnipeg Symphony orchestras, the Duisburger Philharmoniker, Orchestre symphonique de Montréal, and the National Arts Centre Orchestra, Ottawa. In spring 2017, Hewitt toured the UK with Vienna’s Tonkünstler Orchestra. Recent appearances include the Toronto Symphony and Washington’s National Symphony Orchestra, and an Asian tour with the Academy of St Martin in the Fields and Sir Neville Marriner. Hewitt also directs the Festival Strings Lucerne from the keyboard at Munich’s Gasteig.

In autumn 2016, Angela Hewitt embarked on a major project entitled “The Bach Odyssey”, which comprises performances of all of Bach’s keyboard works in twelve recitals over the next four years. Hewitt will present these performances in major cities and venues around the world including London’s Wigmore Hall, New York’s 92nd Street Y, Ottawa’s National Arts Centre, as well as in Tokyo and Florence.

Hewitt’s award-winning recordings have garnered praise from around the world. Her recording of Bach’s Art of Fugue was released in 2014, and her ten-year project to record Bach’s major keyboard works for Hyperion has been described as “one of the record glories of our age” (The Sunday Times). Hewitt’s most recent releases include her sixth volume of Beethoven’s sonatas, a new recording of Bach’s Goldberg Variations, and Messiaen’ s Turangalîla Symphony with the Finnish Radio Symphony Orchestra and Hannu Lintu. A first album of Scarlatti Sonatas was released in spring 2016. Her discography also includes CDs of Mozart, Schumann, Couperin and Rameau.

Born into a musical family, Angela Hewitt began her piano studies aged three, performing in public at four and a year later winning her first scholarship. She studied with Jean-Paul Sévilla and won the 1985 Toronto International Bach Piano Competition. Hewitt was appointed Officer of the Most Excellent Order of the British Empire in the Queen’ s Birthday Honours in 2006 and was made a Companion of the Order of Canada in 2015. She lives in London but also has homes in Ottawa and in Italy, where she is Artistic Director of the Trasimeno Music Festival.