EMV welcomes Andreas Staier, one of the world’s most prominent fortepianists and harpsichordists, to inaugurate the newest member of our instrument collection: a fortepiano modelled on an 1819 instrument by Conrad Graf (1782-1851), built by the world-famous Paul McNulty. Graf did much of his most important work during the short life of Franz Schubert, and although he rose to prominence after Mozart and Haydn had died, he was continuing the tradition of Viennese fortepianos with which they were familiar.

The pieces chosen by Staier for this concert are dramatic and colourful, showcasing the wide spectrum of sounds and tones particular to this piano. Haydn’s keyboard pieces are often overlooked compared with those of Mozart and Schubert, but they shouldn’t be. They are full of character and drama. The E flat sonata by Haydn and the B flat sonata by Schubert are among the composers’ very last works and both pieces are thought to be their best keyboard works. Staier’s indisputable mastery will shine in these works inaugurating this newest addition to EMV’s impressive instrument collection.

This concert is generously supported by Eric Wyness

In 1790, Josef Haydn wrote to Maria Anna von Genzinger, his close friend and the dedicatee of his latest keyboard sonata: Your Grace will no doubt have received the new Clavier Sonata by now . . . It’s only a pity that Your Grace doesn’t own a fortepiano by Schanz, since everything is better expressed on it . . . I know I ought to have composed this Sonata for your kind of Clavier, but I found this impossible because I am no longer accustomed to it.

Haydn, now well into his fifties, recognized that the world of instrument-making was one of constant innovation, and he was keen to change with the times. Although Bartolomeo Cristofori constructed the first known pianos by 1700, the instruments did not become widely popular until the latter decades of the century. For much of Haydn’s life (and even for Wolfgang Amadeus Mozart’s youth), the harpsichord was the main keyboard instrument in most venues of musical life. Even then, it was just one member of a diverse assortment of musical-mechanical marvels, including clavichords, organs, and other more exotic instruments.

Keyboards have a reputation as the indispensable companion of composers, who often work out their ideas on the keyboard much as a poet does with pen and paper. Mozart, for one, found it necessary to have a clavichord in his room wherever he was living. All the composers represented in this program wrote for the instruments available to them at the time, but they also composed with those instruments, using them as their tools of musical exploration. This is part of the reason why historical instruments have so much to tell us about the music of the past. Instruments evolved according to popular tastes and the needs of musicians; meanwhile, composers responded to the qualities and capabilities of the instruments. And, as Haydn’s letter says, the instrument of the day was the fortepiano.

Today’s program inaugurates EMV’s new fortepiano modelled on an 1819 instrument by Conrad Graf (1782-1851). In the last few years of the eighteenth century, Graf, a young cabinetmaker, moved to the outskirts of Vienna, where he took up the piano building. By 1824 he had made such a name for himself that he was granted the honorary title of “Imperial Royal Court Fortepiano Maker.”

Graf did much of his most important work during the short life of Franz Schubert, and although he rose to prominence after Mozart and Haydn had died, he was continuing the tradition of Viennese fortepianos with which they were familiar—the work of builders such as Johann Schantz, Johann Andreas Stein, and Anton Walter, whose instruments Haydn and Mozart owned and admired. Some of the hallmarks of the Viennese fortepianos were a light, sensitive touch, a mainly wooden construction, a colourful, singing tone, and a compass of about five octaves (although this grew over time). Graf held on to the craftsman-like ethos of this tradition while industrial manufacturing was taking control of the piano business elsewhere (especially in Steinway’s America). Until about 1840 he continued to design and build instruments esteemed by leading musicians such as Robert and Clara Schumann, Felix Mendelssohn, Frédéric Chopin, and Franz Liszt.

The Fantasia in c minor (KV 475), dating from Mozart’s most successful years as a free agent in Vienna, conjures up the composer’s reputation as not only a brilliant pianist but also an inspired improviser. As a genre, the “fantasia” carries associations of improvisatory freedom, suggesting a free flight of imagination. Highly chromatic, mysterious, and unpredictable, Mozart’s c-minor fantasia takes us on a fanciful journey through distant keys, moods, and regions of the piano. Instruments such as Graf’s had a less homogeneous tone from the bottom to the top of their range than modern pianos, so the lower and higher registers had a markedly different timbre. From the first measures of the fantasia, Mozart is playing the dark, deep reaches of the instrument—which are particularly well explored in this piece—against the clearer, singing upper range. Indeed, the F1 (almost three octaves below middle C) Mozart calls for at the climax of one of the stormiest episodes would have been the very bottom of a Stein piano from the 1780s. The nuanced dynamic markings in Mozart’s score, including dramatic fortepiano (fp) indications, indicates that the composer had the expressive capabilities of the new pianos strongly in mind.

As Haydn’s letter to Mme. Genzinger shows, he too thought of the fortepiano as the prime vehicle for solo keyboard music by 1790. The Sonata in E flat major (Hob. XVI:49) Haydn dedicated to his friend and student treats the instrument with inventiveness and flair, from the first movement’s cheeky opening theme to the sprightly minuet finale. The second movement, marked “cantabile” (singing or songlike), is as tuneful, and as suspenseful, as an operatic aria. It seems that Haydn was willing to test the skills of his talented dedicatee: he asks for both rapid passagework and impressive hand crossings. Composed in 1793 between extremely successful London tours, the set of Variations in f minor (Hob. XVII:6) is one of the masterpieces of the keyboard repertoire. The compelling Andante theme has a solemn and perhaps slightly eccentric character. Through a series of highly original variations, Haydn shows a particular fondness for quirky rhythms; notice the recurrences of the melody’s opening dotted figure, which pervades the powerful and satisfying finale to its very last measure.

Whereas Haydn and Mozart adopted the fortepiano with enthusiasm partway through their lives, Schubert was a child of the Viennese fortepiano’s golden age. Schubert’s Sonata in B flat major (D 960) was his final work for piano, one of three great sonatas he completed within months of his death in November, 1828. It seems appropriate to view this sonata as the culmination of a lifetime’s intimacy with the piano, which was integral to Schubert’s distinctive musical voice in hundreds of songs, solo keyboard pieces, and chamber works. As striking as Schubert’s beautiful melodies are his subtly and richly varied accompaniment textures, which underpin an atmosphere of melancholy contemplation breaking out in moments of Beethovenian intensity and joy. The first movement’s recurring low trills use the instrument to create a sense of immense distance—a common theme in Schubert’s many songs about solitary wanderers. Perhaps it is not surprising that one who wrote so eloquently for the piano—and who was prone to identify as such a solitary wanderer himself—sometimes imagined the instrument as a creative companion and a second self: “So I am alone with my beloved [art],” Schubert once wrote to a friend, “and have to hide her in my room, in my pianoforte and in my breast.” 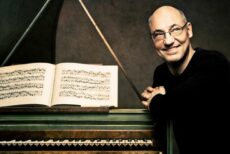 One of the world’s most prominent performers, Andreas Staier’s indisputable musical mastery has made its mark on the interpretation of baroque, classical and romantic repertoire for period instruments.

Born in Göttingen, he studied modern piano and harpsichord in Hannover and Amsterdam. For three years, he was the harpsichordist of Musica Antiqua Köln with whom he toured and recorded extensively. As a soloist, Andreas Staier performs throughout Europe, North America, and Asia withvorchestras such as Concerto Köln, Freiburger Barockorchester, the Akademie für alte Musik Berlin and the Orchestre des Champs – Elysées Paris.

As a chamber musician Andreas has been highly acclaimed by international critics for his work with a wide range of other instrumentalists, singers and actors.

Andreas has recorded extensively for BMG, Teldec Classics, with whom he had an exclusive contract for seven years, and harmonia mundi France. His catalogue boasts numerous awards including a Diapason d’or, the 2002 Preis der Deutschen Schallplattenkritik and the 2011 Baroque Instrumental Gramophone Award. In March 2020, Andreas released a double disc, Ein neuer Weg, for harmonia mundi dedicated to the works of Beethoven to commemorate his 250 th anniversary. The disc was widely acclaimed by critics, described as bringing “tremendous drama and imaginative flair” by Gramophone. Upcoming is a long-awaited presentation of J.S Bach’s Well-Tempered Clavier.